Pack your bags, Detectives, it’s time to take a trip down memory lane! Mrs. Talbot has found some of June’s old photo albums and she needs your help piecing the memories back together.

Memoirs is an exciting new time-limited event where you collect packs which contain snippets of June’s memories to complete gorgeous albums and relive a moment from June’s past. When a Memoir album is available you’ll come across different ways to obtain packs of snippets to satisfy your inner collector.

As you relive June’s memories through Memoir albums you’ll not just be rewarded with nostalgia, but juicy rewards as well!

What are Memoirs?
Memoirs are parts of June’s past which are told through albums. Each Memoir has a unique theme which reveals parts of June’s glamorous life, such as her time abroad.

Memoir albums are available for a number of weeks, during which time you’ll have the opportunity to collect snippets in packs through various in-game events. As you collect snippets you will place them in albums to help relive June's memories and earn some awesome rewards. 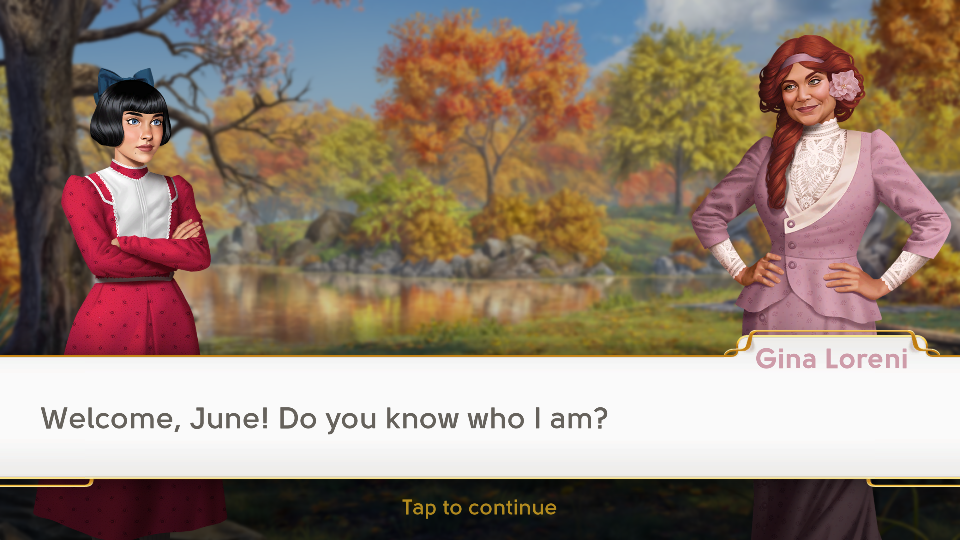 Snippets come in packs that have different rarities assigned to them. Each album page will require you to get a specific amount of snippets of certain rarities that you can then place in the page’s picture.

As your collection of snippets starts to grow you’ll start getting a few Déjà Vus. Don't fret, Déjà Vus are valuable too, since you can exchange them for sweet rewards in the Déjà Vu Token Store. 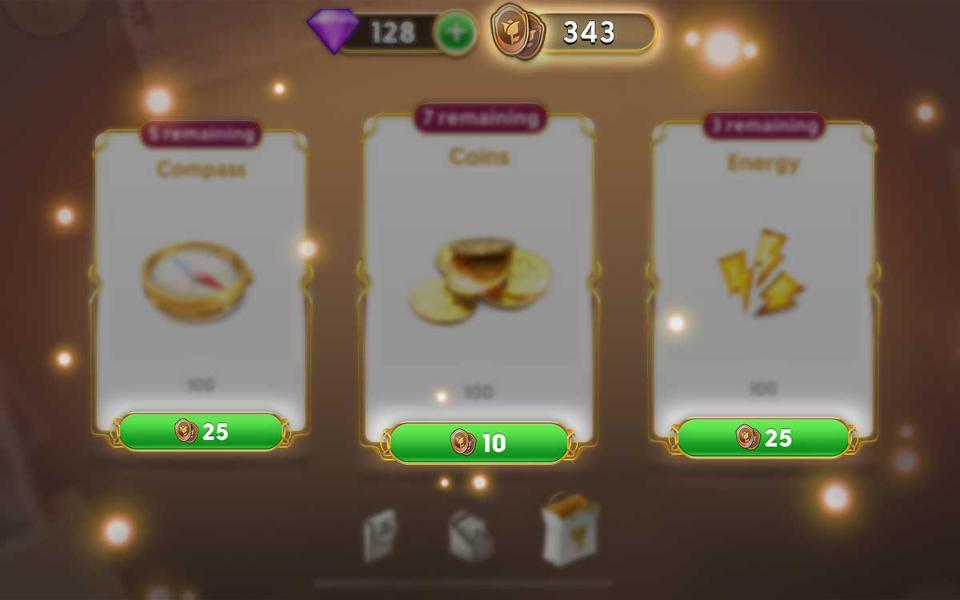 If you’re excited to complete a gorgeous album or having a hard time obtaining packs, you can also buy them directly from the Pack Shop for Diamonds.

There’s a lot of exciting stuff happening as you put together an album, but be sure to keep an eye out for the album’s runtime and cooldown! These timers let you know how long you have to complete an album and place snippets before the Memoir is done.

Digging up the past is just part of the fun. There are a ton of exclusive rewards waiting for you throughout Memoirs so let’s make some memories!
Where can I find the Memoir album?
The album screen and your key to June’s past is accessible via the island by tapping on this button:

Every time a new album starts you’ll be treated to a story of nostalgia, then you’ll land on the album screen.

On the album screen you’ll find the time you have left to complete the album, how many snippets you have placed on each page, and most importantly your rewards!

Packs are little containers of memories that hold snippets needed to complete albums.
Packs come in different tiers! Higher tier packs may contain more snippets. Also, the stars on the pack shows the minimum guaranteed rarity for one of the snippets in that pack.. For example, one snippet with a rarity of 3 stars or higher is guaranteed in a 3-Star pack. 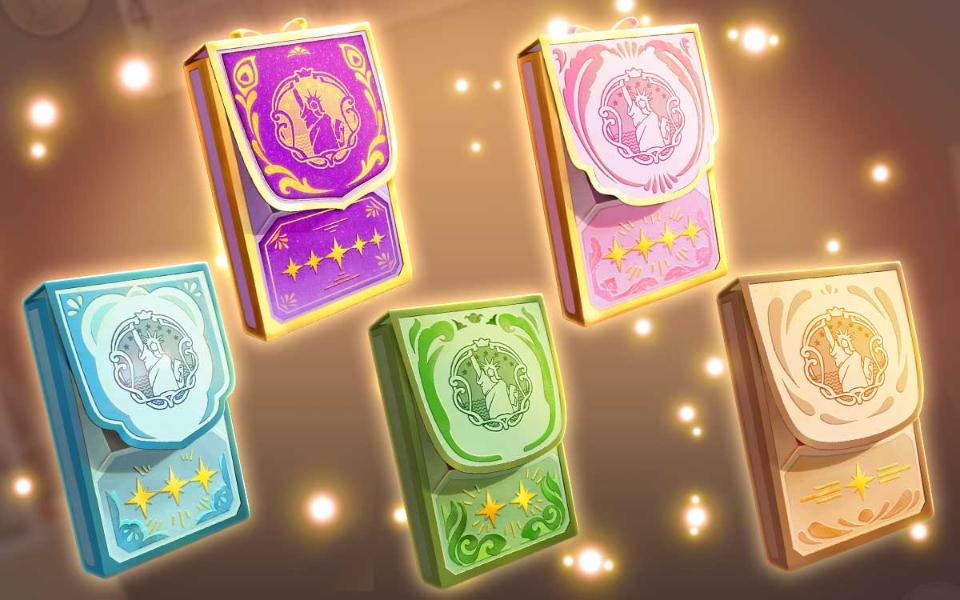 How do I get packs?
When an album is active there are tons of possibilities for a savvy collector to obtain packs. There’s a chance to earn packs through playing Hidden Object Scenes, so keep an eye out at the end of every round to see if you’ve gotten any juicy packs! 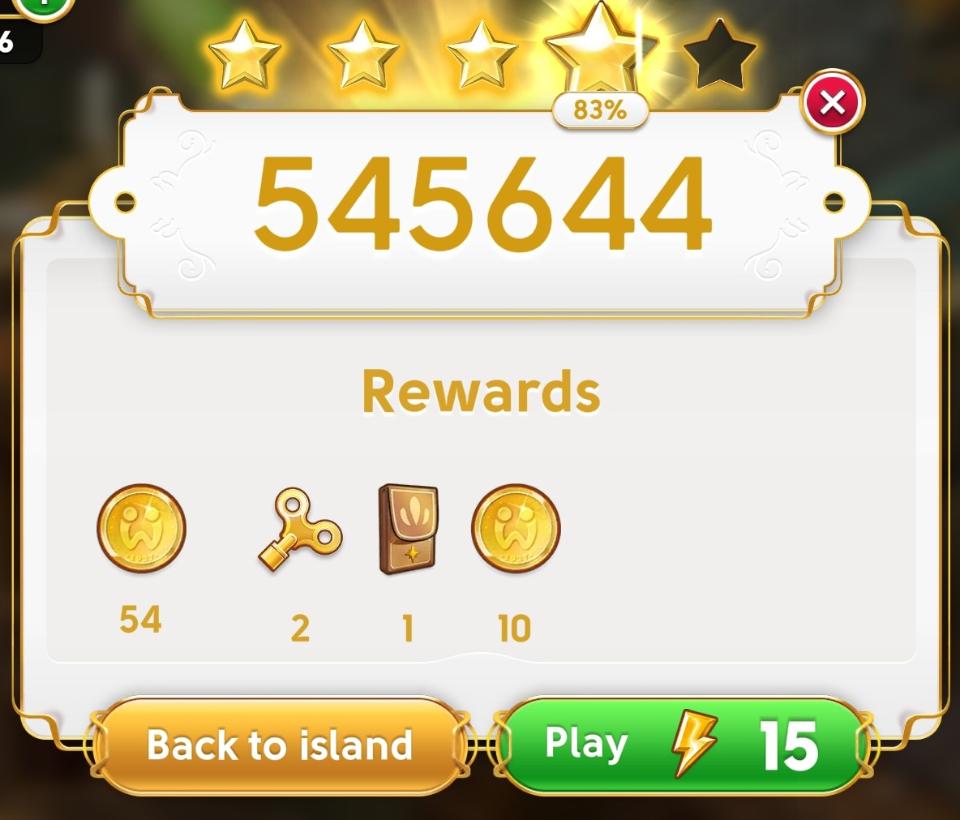 Keep an eye out for chances to earn packs. Here are a few examples of places where you might be able to collect packs:
Detectives Needed events
Fairground Fortune events
Club competitions and Leagues
Flash Bonuses

You’ll also get the chance to obtain packs by making purchases during sales or in the store. Needless to say there is no shortage of ways you can obtain packs.

How do I open packs?
Undoubtedly the best part of obtaining packs is opening them! To get started, head over to the pack screen found under the album screen:

All that’s left to do is tap on the pack you want to open up and enjoy your snippets. 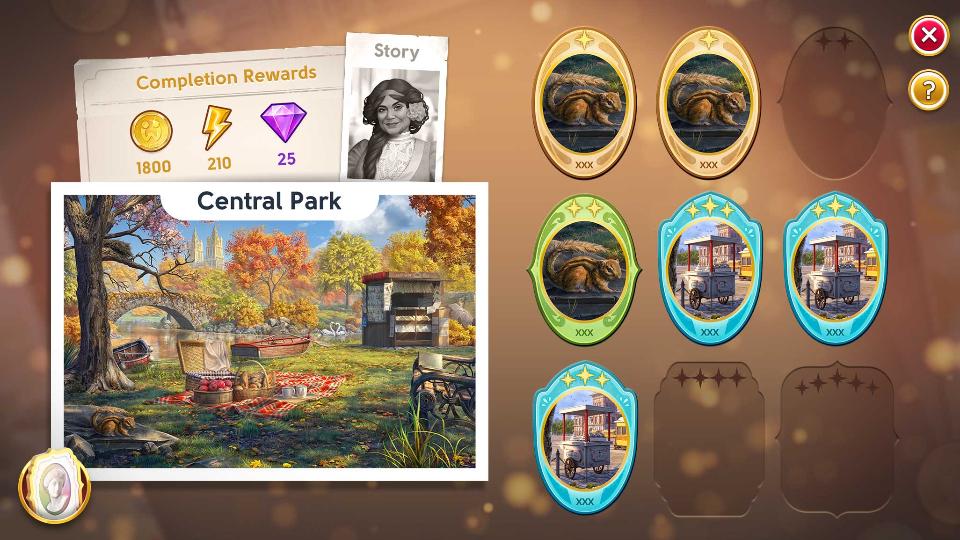 You can tell the rarity of a snippet by how many stars are on it. Here’s a little peek at a 2-Star snippet: 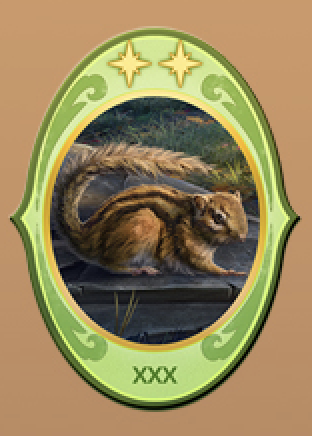 How do I get the different snippet rarities?
Higher pack rarities have bigger chances of containing rarer snippets, and one snippet has a minimum rarity you can expect to find. You can check the rarity of a pack by the amount of stars it has: 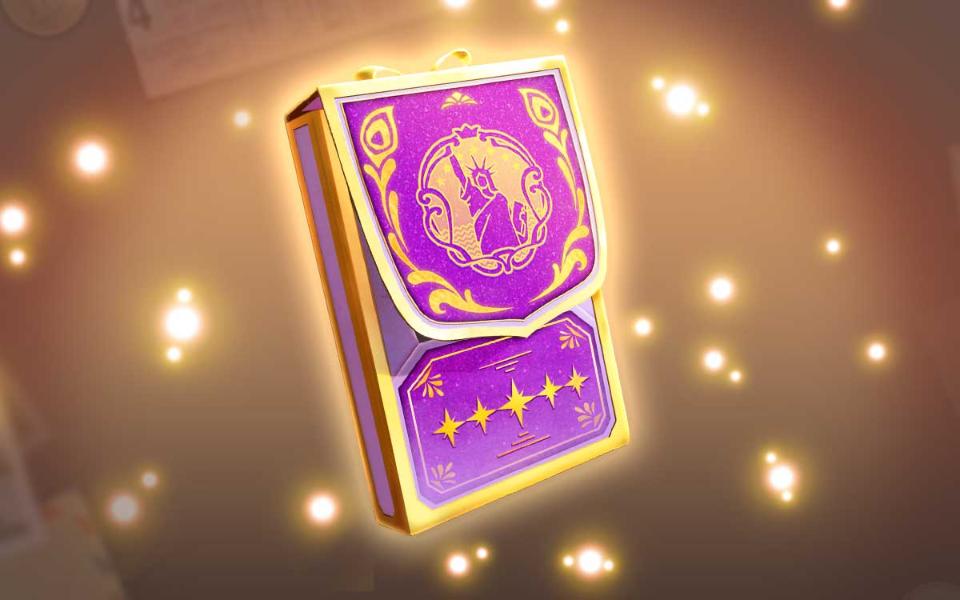 That’s all you need to know about pack and snippet rarities, don’t forget to hunt for them in various in-game events and in the store!

How do I place my snippets in the pictures?

Now that you’ve gathered a few snippets, it’s time to reconstruct those memories! Head on over to the page screen and place each snippet on the slot where it fits, kind of like a jigsaw puzzle. From there you can see the picture slowly come to life:

Once you get your hands on some snippets, be sure to place them as soon as possible for a gorgeous picture and beautiful rewards!
What rewards can I get in Memoirs?
There are a bunch of great rewards (including some exclusive goodies you can get by helping June relive her memories through Memoirs). You can expect some generous and even exclusive rewards when you:
Complete a page
Place a certain number of snippets
Complete the album

As you continue to collect and place snippets, you can check how much progress you’ve made in an album through the album screen.

On the left-hand side of this screen you can see how many snippets you have placed in the pages of the current album, and how close you are to the next album rewards: 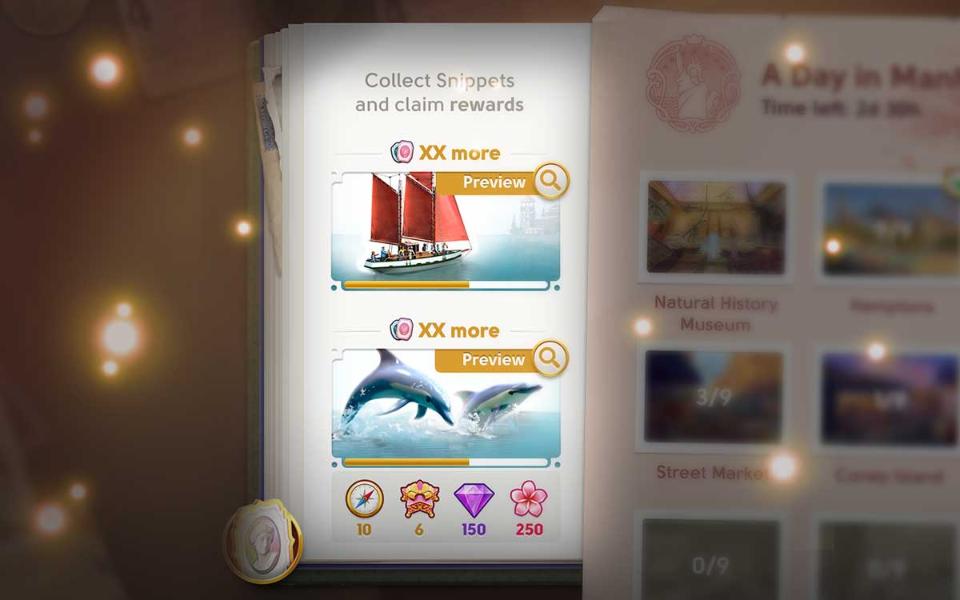 The milestone and final rewards consist of Island Beautifications, which are exclusive decorations that bring the natural areas of Orchid Island to life. If you want to get a taste of how gorgeous these will look on your island in advance, you can tap on the Beautification card to preview them.

You’ll also be treated to a small cutscene of June’s past memories each time you complete a set or album. You might even stumble across an adorable little June in these blasts from the past!

What are you waiting for? Check Memoirs out right now to see what delicious rewards you can get in the current album!
What are Déjà Vus and the Déjà Vu Token Store?
As you open more and more packs, you’ll bump into some snippets you’ve already obtained. These are Déjà Vus:

There’s no need to be bummed out though, Déjà Vus are also super useful when completing an album! Déjà Vus can be exchanged for incredible rewards in the Déjà Vu Token Store. The Déjà Vu Token Store is accessible via the pack screen and can be accessed throughout the entire album runtime: 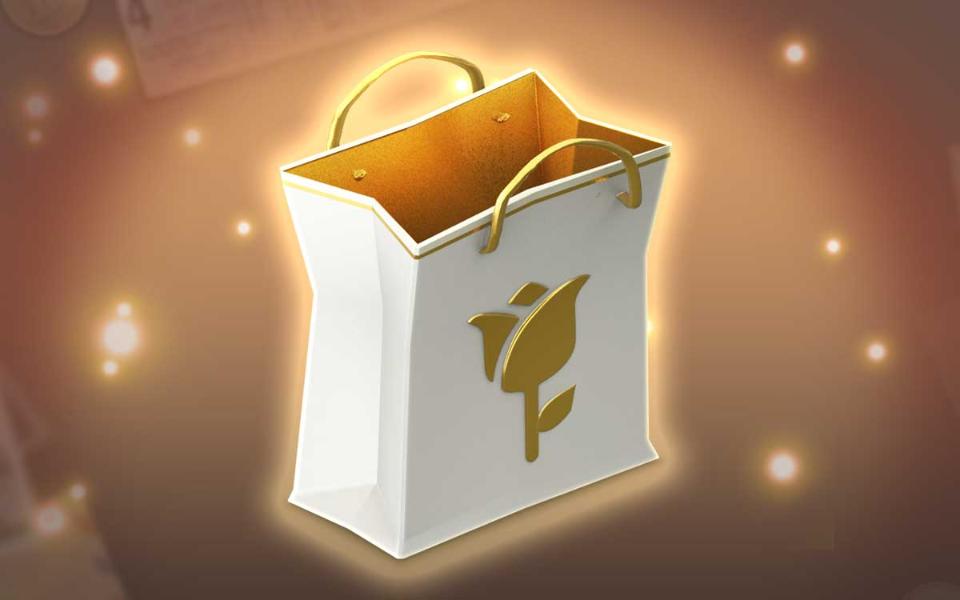 What are time-limited rewards?

Having trouble finding something you like, Detective? Don't fret, the rewards in the Déjà Vu Shop are updated regularly!

The timer above the Déjà Vu Shop represents how much time is left before a new set of rewards is introduced. Once the timer is up, rewards marked as time-limited may be replaced with new rewards or have their quantities restocked.

Rewards not listed as time-limited aren’t affected by the store updates and instead stay in the Déjà Vu Shop as long as their quantity lasts.

Tick tock, Detectives! Be sure to grab time-limited goodies before the timer is up, or save those tokens for the exciting new cycle!

What is the Pack Shop?
The Pack Shop is a cozy little place where you can exchange your Diamonds for packs. This is super helpful if you’re looking for packs of certain rarities or want to double down on your pack collection!

The Pack Shop is accessible via the pack screen:

What are June’s Flashbacks?

Do you ever feel like you’re forgetting something but don’t know what? Well, don’t worry because we’ve got your back with June’s Flashback!

June’s Flashbacks are incredibly handy for finishing up albums, since they retrieve a random missing snippet from the current album for you.

How do June’s Flashbacks work?

The best part about having a flashback is that it does all the work! Once you’ve acquired one of June’s Flashbacks from the shop, they are automatically used right there and then.

From here simply tap to reveal, and June’s Flashback will retrieve a random missing snippet from your current album!

If you’ve earned one of June’s Flashbacks outside of the Déjà Vu Token Store or Pack Shop, they are automatically used the next time you open the album screen.

Where do I get June’s Flashbacks?
These little blasts from the past are both helpful and rare. There are a few ways you can acquire them though. Keep your eyes peeled for sales and offers that contain June’s Flashbacks, or purchase them from various stores like the Pack Shop and Déjà Vu Shop.

June’s Flashbacks may even come up as rewards for various events, so be sure to participate and take a walk down memory lane, Detectives!

What happens to leftover June’s Flashbacks?

June's Flashbacks are only usable while an album is active or during its cooldown period, so make use of them while you can!

If you haven't used all your June's Flashbacks by the end of the cooldown period, they will be factored into the compensation reward that you will get for remaining packs, Déjà Vu tokens, and Companion Reminders.

June’s Flashbacks are a great resource for filling in those missing snippets, so be sure to jog June’s memory whenever you can! 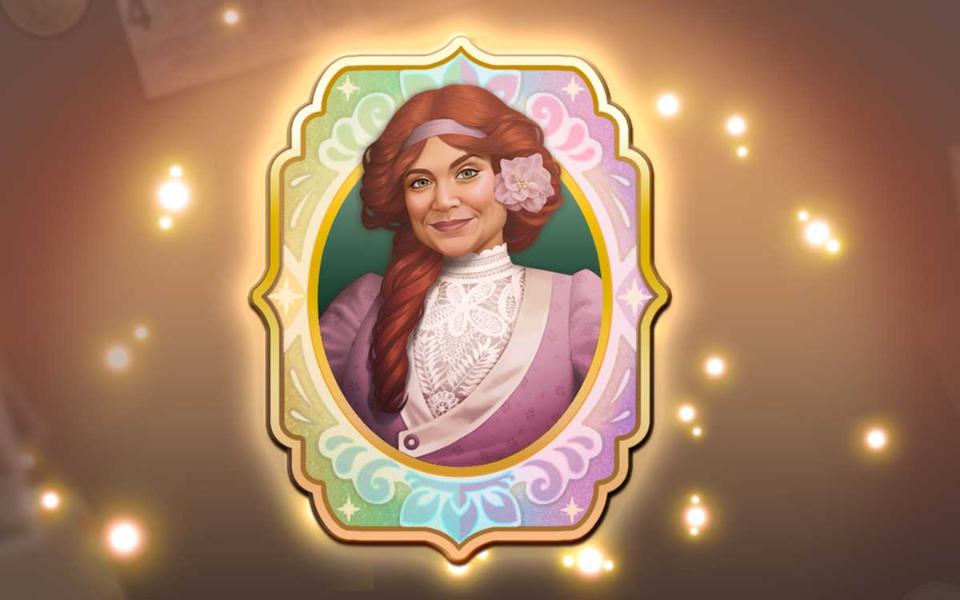 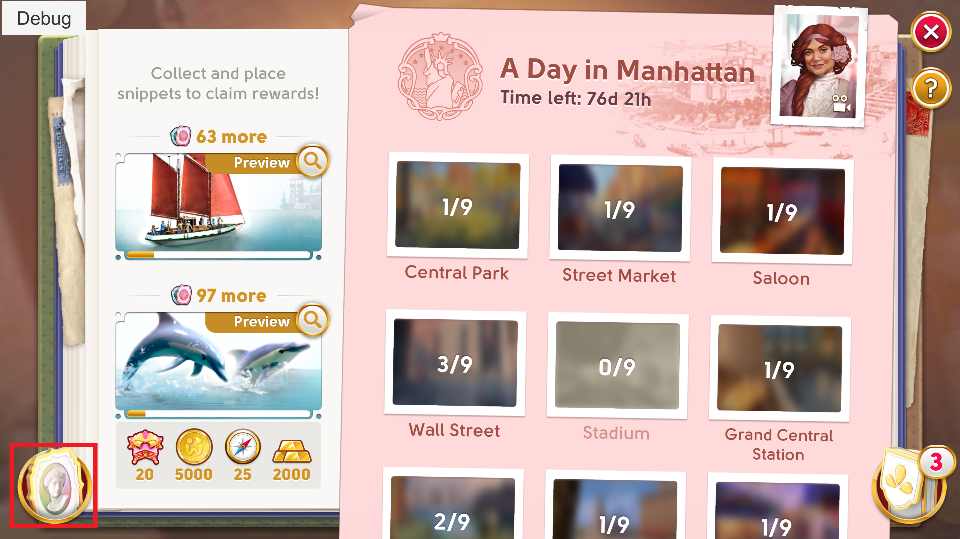 There are three different ways to access and use your Companion Reminders: 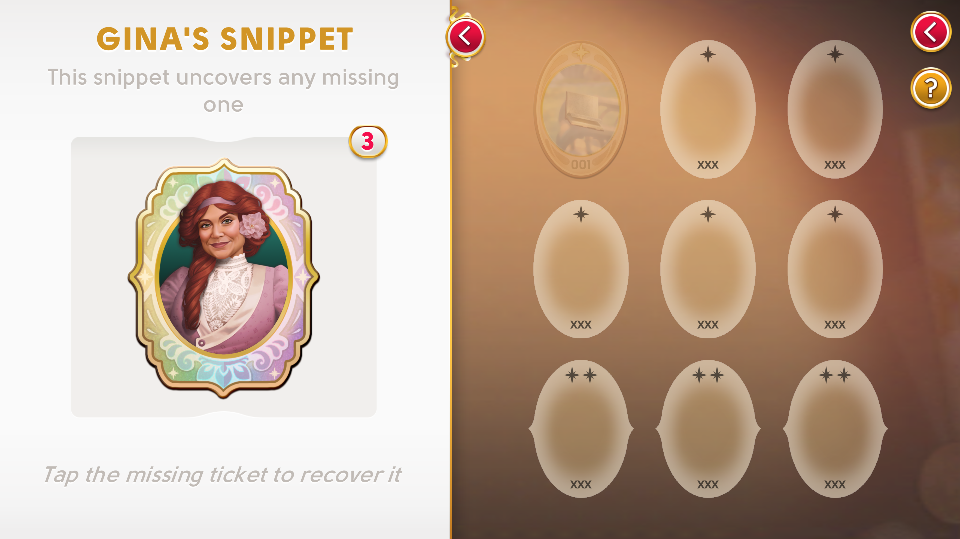 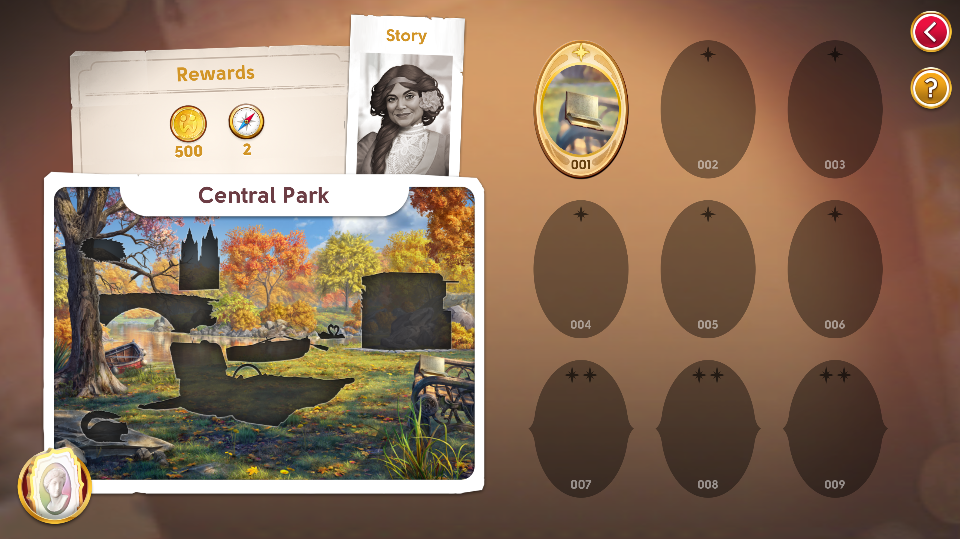 Tap on an uncollected snippet on the page screen and then tap the Companion Reminder button on the right. 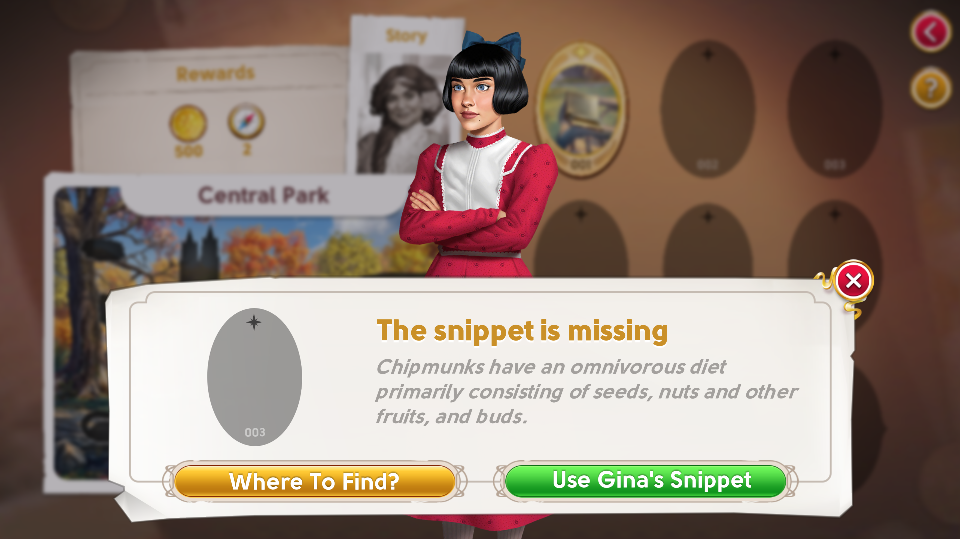 Companion Reminders are rare and valuable just like real besties, so be sure to strategize around how you want to redeem them!
How much time do I have to complete an album?
You can see how much time you have left at the top of the album screen: 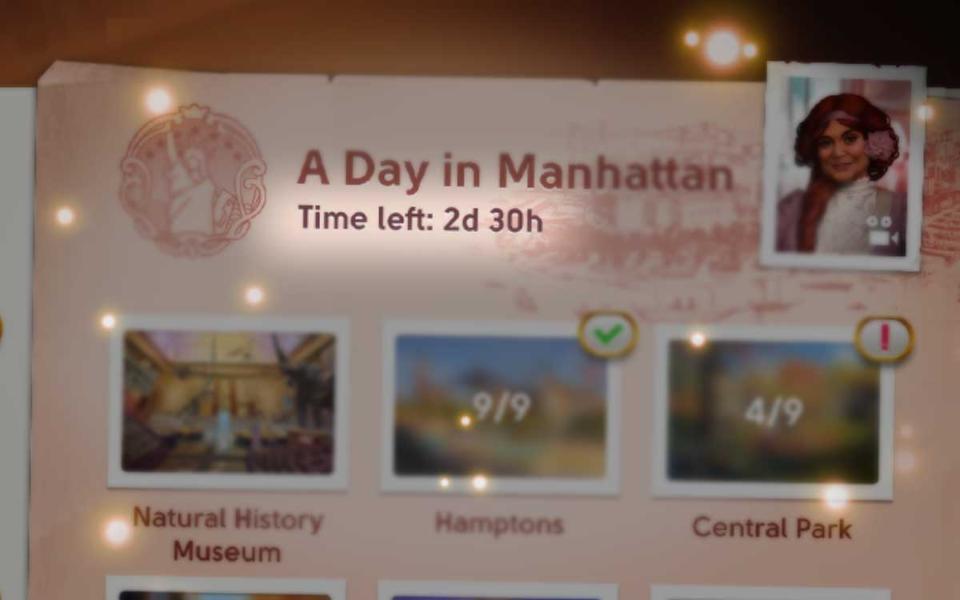 Once this timer expires, the runtime of the album will be over and the cooldown phase will start.

What is the cooldown of the album?

After all that hard work collecting snippets it’s about time to cool down! The cooldown starts at the end of the album’s runtime. During cooldown you won’t be able to earn packs or Companion Reminders for the current album anymore. 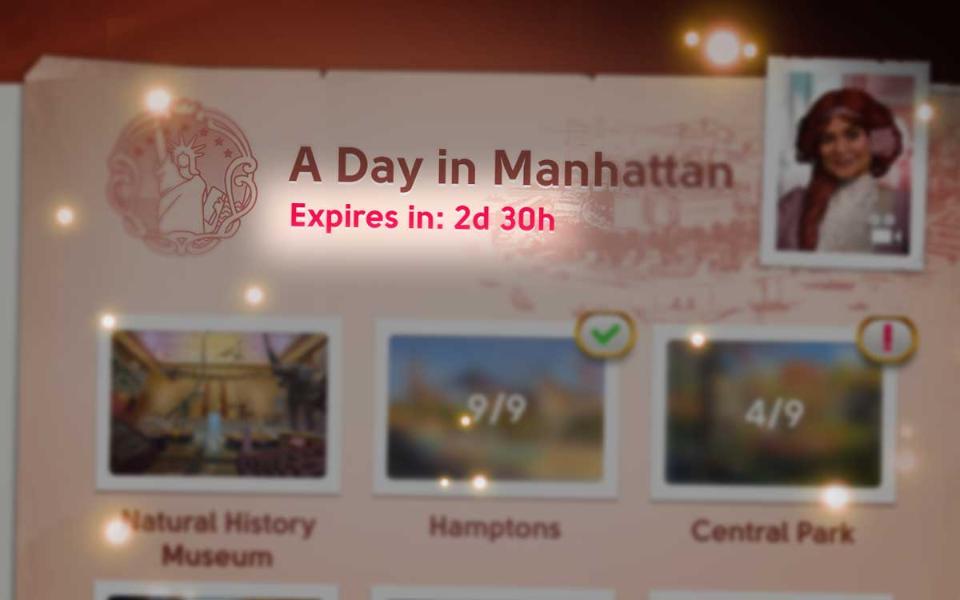 Don’t worry though, you’ll have your last chance to open all your remaining packs, use Companion Reminders, exchange Déjà Vus, and most importantly redeem prizes like milestone or album rewards!

What happens when the cooldown is over?

Once the cooldown is over, it will be the end of the Memoirs event, and the album rewards will not be available anymore. But don’t worry, you will still have access to all the snippets you collected, and to the past stories of the pages you completed. 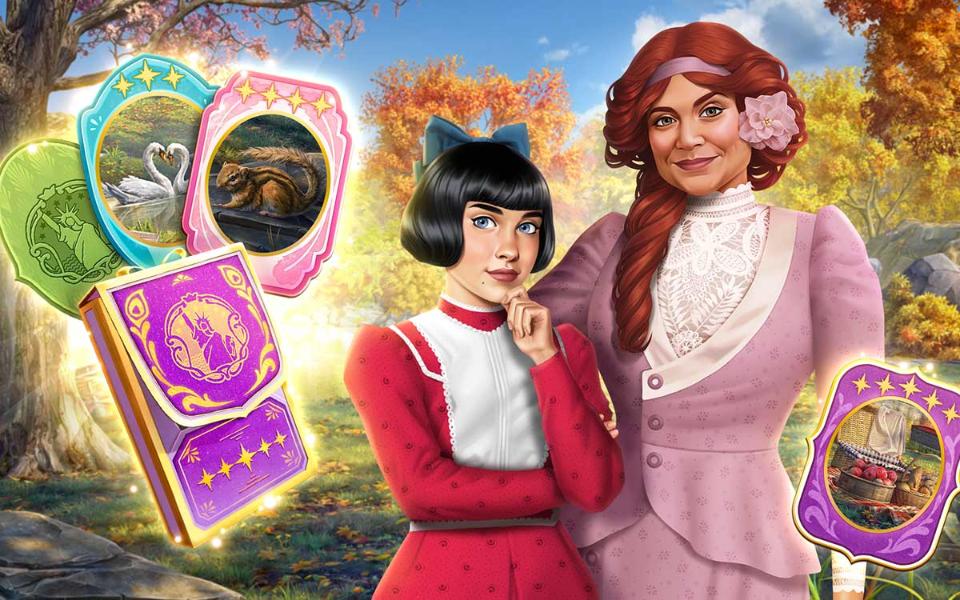 You should make sure to use all your remaining packs, Companion Reminders, and Déjà Vus before the event is over. If you don’t, then all remainders will be converted into a compensation reward that will be sent to your inbox.

Finally, new albums will be released in the future, so be sure to keep an eye out for them!